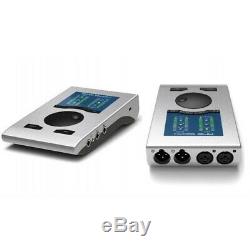 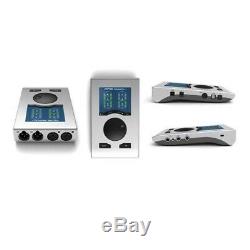 12-in/12-out audio interface in a sleek package. The sheer power and flexibility of the Babyface Pro FS are pretty remarkable when you lay your eyes on it. Its low-profile aluminum casing has a great clean look but still offers deep control over levels, sub-mixes, and gain structures.

There are two reference-quality digitally controlled mic preamps, two balanced line outputs, line/instrument inputs, ADAT/SPDIF I/O, a MIDI port, and two headphone outputs. You also get onboard metering with peak and RMS calculation. Best of all, the Babyface Pro FS achieves all of this while staying very straightforward and looking great on your desk. Boasting the same SteadyClock FS circuit as RMEs reference-quality ADI-2 Pro AD/DA converter, the Babyface Pro FS takes self-jitter to new lows, eclipsing its predecessors already impressive performance with an upgraded analog PLL circuit and referencing both Direct Digital Synthesis and PLL to a low-phase-noise quartz crystal. In fact, the Babyface Pro FS's self-jitter reaches levels that are usually only available in master quartz clock mode, even while running in PLL mode.

Thanks to this updated circuit, the Babyface Pro FS reaches jitter specs as low as a femtosecond. Just to put it in perspective, that's 1/1,000,000,000,000,000 of a second! A bevy of other design improvements nets unbelievable sound quality.

On top of its updated SteadyClock FS circuit, the Babyface Pro FS includes a bevy of other improvements over its predecessor. Its microphone preamps boast an improved signal-to-noise ratio, from 112.2dB to 113.7dB, while the line/instrument inputs went from 114dB to 116.3dB.

The line inputs THD was improved by 8dB. The Babyface Pro FS employs the same high-quality output op-amps as the ADI-2 Pro. Its 3.5mm headphones output power was increased from 70mW to 90mW, and the THD of both headphones outputs has been improved by up to 10dB. Plus, the 3.5mm outputs impedance was lowered from 2 ohms to 0.1 ohms. A +19/+4dBu switch reduces the interfaces output level, improving its signal-to-noise ratio for sensitive active monitors, avoiding overloads and distortion, and enabling you to keep TotalMix FXs faders near 0dB instead of at high attenuations. You also get six samples less latency on the A/D side. And all of these improvements were achieved without raising the audio interfaces power consumption! TotalMix FX provides latency-free processing, monitoring, and effects. The Babyface Pro FS comes loaded with RME's TotalMix FX engine. This dual-DSP system uses one DSP chip for monitor mixing, leaving the other free for latency-free effects and processing.

The routing side of TotalMix FX gives you a fully flexible 288-channel mixer with 46-bit internal resolution. Each of the Babyface Pro FS's channels features a 3-band EQ, low-cut filter, reverb, and echo.

That means you can track with the effects and processing you need, without ever having to worry about latency or your computer's processing power. RME Babyface Pro FS Features. 12-in/12-out portable USB 2.0 audio interface. Rugged, low-profile housing has a great clean look but still offers deep control.

TotalMix FX gives you a fully flexible 288-channel mixer with 46-bit internal resolution. Each channel boasts latency-free processing, including a 3-band EQ, low-cut filter, reverb, and echo. Onboard metering with peak and RMS calculation for keeping an eye on your levels. Mic stand thread on the bottom for free positioning.

This item is in the category "Musical Instruments\Pro Audio\Audio/MIDI-Interfaces". The seller is "stringsforless_au" and is located in Williamstown VIC. This item can be shipped worldwide.