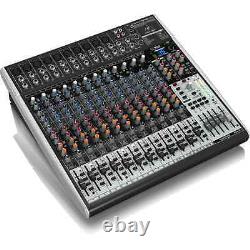 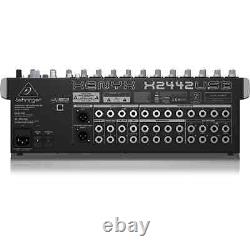 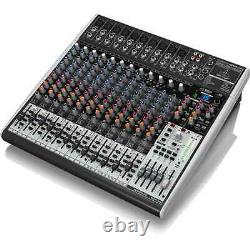 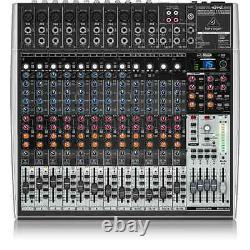 100v Line Amps & Speakers. Microphone Pop Shield & Filter. Behringer Xenyx X2442USB 24 Channel Mixer with USB Audio Interface. The XENYX X2442USB from Behringer is a featured packed mixer that allows you to effortlessly achieve premium-quality sound thanks to 10 onboard studio-grade XENYX Mic Preamps and ultra-musical "British" channel EQs with a semi-parametric mid band for the maximum flexibility in sound sculpting. And Behringer's easy-to-use "one-knob" compressors provide total dynamic control for the ultimate in punch and clarity, while respecting all the power and emotion you pack into every note.

Add to this their 24-bit, dual-engine Multi-FX processor with 16 editable, professional-grade presets including reverb, chorus, fl anger, delay, pitch shifter and multi-effects and the X2442USB becomes an incredibly versatile mixer for your live performances. But the X2442USB wasn't just designed to handle your live gigs; it also provides the state-of-the-art tools you need to make stunning, professional-quality recordings.

Along with the built-in USB/audio interface, the XENYX X2442USB comes with all the recording and editing software needed to turn your computer system into a complete, high-performance home recording studio. All XENYX mixers have one thing in common great-sounding, high headroom XENYX mic preamps. These state-of-the-art mic pres represent a major step in the evolution of audio technology and they can easily hold their own, even when compared to the most expensive stand-alone mic preamps.

XENYX preamps off er a staggering 130 dB of dynamic range, with a bandwidth that extends from below 10 Hz to well above 200 kHz. Armed with these outstanding mic preamps, XENYX mixers provide such transparent, crystal-clear performance you just might think someone upgraded your mics while you weren't looking. Studio-Quality Compressor - Stairway to Heaven. Our studio-grade compressor is based on classic and famous studio equipment from the 70's. This totally transparent and musical compressor design allows your full dynamic range to shine through until your signal reaches the compression threshold, which is indicated by the highly visible status LED. The compressor increases sustain and gently smoothens out signal peaks, which is especially handy when you're laying down the funk, à la slap and pop or hammering home your most-aggressive metal lines. The resulting output level lets you unleash powerful and impact-laden bass lines, while still sitting right where you need to be in the mix!

The British consoles of the 1960s and'70s changed the sound of rock and roll without them the British Invasion might not have happened. Those legendary mixing desks soon became the envy of engineers and producers all over the world.

Equipped with our studio-grade 24-bit Multi-FX processor, the X2442USB gives you 16 mind-blowing digital effect presets such as delay, chorus and reverb. Time-based functions can be entered manually by pressing the Tap button in tempo with the music.

Apply them to any channel, as well as to the monitors and main output. Of course, if you have treasured outboard gear you've grown attached to, the X2442USB lets you integrate them into the mix bypassing the built-in FX processor. Premium ultra-low noise, high headroom analog mixer. 10 state-of-the-art, phantom-powered XENYX Mic Preamps comparable to stand-alone boutique preamps. 8 studio-grade compressors with super-easy "one-knob" functionality and control LED for professional vocal and instrumental sound.

This item is in the category "Musical Instruments\Pro Audio Equipment\Mixers". The seller is "intaaudio" and is located in Coventry. This item can be shipped to United Kingdom, Ireland, Germany, France.